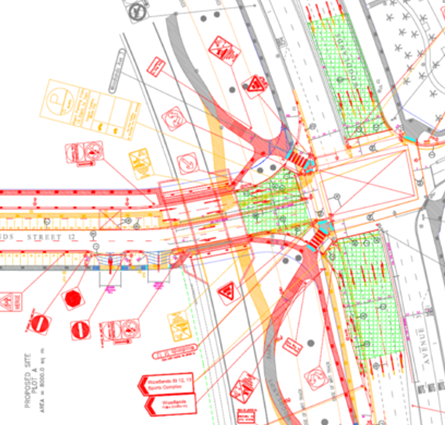 While vehicle ownership and traffic volume increase rapidly in cities, road networks and capacity do not increase at the same speed and this causes bottlenecks.

Especially the problems experienced in the zoning plans and the high expropriation costs make it difficult to open new road networks.

In this case, the most important solution is to use the existing capacity efficiently. The willingness of the administrations to produce economic solutions makes it obligatory to bring suggestions on the subject.

For more efficient use of road networks and for the solution of congestion at intersections;

In order to solve the existing problems, we make investigations in the field with our expert team, and we collect existing and new data. We produce transportation plans based on the analysis of the collected data in the office environment.

The project consists of the following stages.

Data such as the existing lane width, pavement type, circulation status, park pockets and zoning status of the roads and junctions in the project field, and the importance and grading of roads in urban traffic are collected and processed on maps.

In order to measure the traffic volume on roads and junctions, crossroads, cross sections, cords / curtains and pedestrian counts are conducted. The counts are processed with cameras at the peak and normal hours and the vehicles are classified in the office environment according to their class, type and size given the time intervals.

Analysis and Detection of Problems

Thanks to the data obtained as a result of field studies, congestion, bottlenecks and current problems in traffic are examined and solutions are created. Besides that, analysis and synthesis studies are conducted and the base of the projects is prepared.

Arrangements are made in order to prevent existing and potential congestion in the road network and junctions within the project field. Fluidity in traffic is achieved by deciding single and double direction applications, intersection types, as well as the number of roads and lanes.

After the circulation plan is completed, road and intersection arrangement projects are prepared to the extent permitted by the zoning plan. By ensuring lane discipline on the roads, arrangements are made on the road width and curvature radii with respect to the international standards. Public transportation and taxi stall pockets and parking pockets are determined and processed in projects. New arrangements are made in the parts where the intersection type needs to change.

Circulated and geometrically arranged road network and intersections are simulated and the solution is proposed among the options that gives the best results. The improvement achieved through the comparison of current situation and the proposed project is evaluated with respect to several criteria, such as time and tail length, and the benefits are reviewed.

Additionally, if necessary, the simulations are created for pedestrian currents in order to observe the mobility in the attraction centers.

Horizontal and vertical marking projects are prepared for the hazard warning, traffic arrangement, information, pause and parking, construction, maintenance and repair signs of the projects, for which road and crossroad geometric arrangements have been completed within the framework of the rules and standards specified in the Highway Traffic Law.

While conducting traffic regulation projects, signalization projects are prepared at intersections that are designed to be signalized. Phase number and duration are decided according to the traffic volume of the junction.

Continuous, safe bike paths and parking areas are designed in sections that are compatible with the zoning plans and where the road section allows.

Arrangement, orientation, horizontal and vertical marking projects are prepared in the sections allocated as parking areas.